What is Round Dancing? 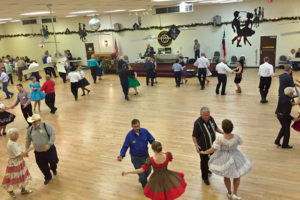 Round Dancing is an adjunct to Square Dancing where couples dance in a circle around the hall to pre-choreographed routines.  It looks like Social or Ballroom Dancing, since the rhythms and movements are the same.  However, round dancers have the advantage in that each dance has been fully choreographed ahead of time.  Choreographers choose dance rhythms and figures to fit the selection of music, such as foxtrot, waltz, jive, cha, rhumba, etc.  Instructions on how to dance this choreography are written out in a cue sheet.  Then a cuer tells the dancers what steps to do as the music plays – the same as in square dancing where a caller tells the couples what to do.  This cueing lets us dance lots and lots of dances without having to memorize the choreography.  So for the man, the round dance cuer is his savior, freeing him from having to determine, and the lady from guessing, each figure throughout the dance.  Both are now able to focus on performing and enjoying the figures as announced.  And since round dancers perform in unison moving in the same direction around a large circle, it became known as Round Dancing. 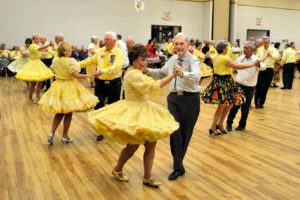